Water domesticated by man for hundreds of years and which has created paths, landscapes, wealth and a whole series of water infrastructures, which have been a fundamental and essential part of the life of the inhabitants of La Costera. 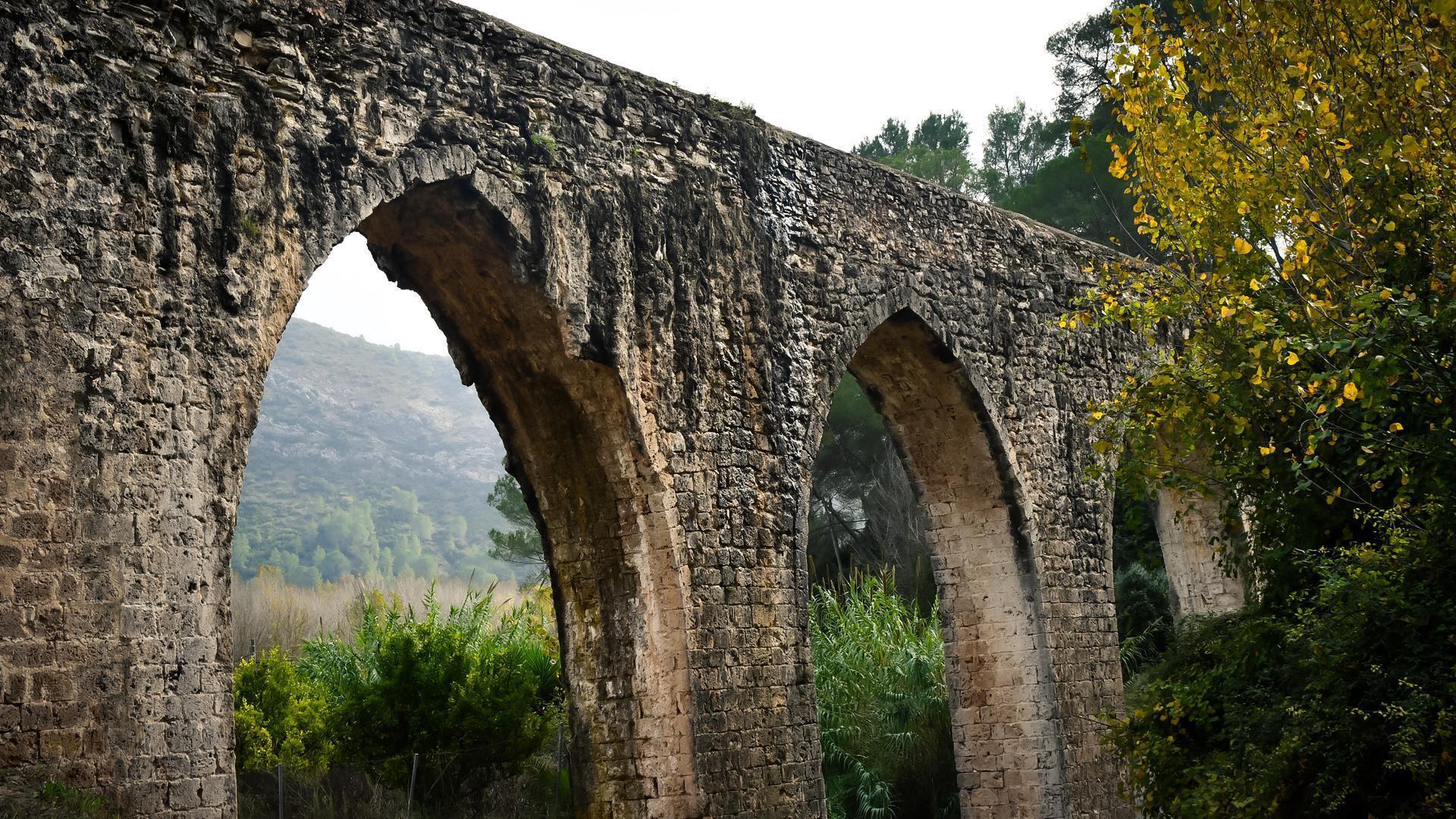 Water domesticated by man for hundreds of years and which has created paths, landscapes, wealth and a whole series of water infrastructures, which have been a fundamental and essential part of the life of the inhabitants of La Costera.

Life in the body of la Costera

Water is life everywhere, but in La Costera this relationship has followed the paths traced by the water in the rivers, ravines and irrigation channels or revolving around the points where it accumulated or could be used. Being the link between the extensive irrigation of the orchards and the dry land has meant that we can enjoy a heritage of water, a richness and a variety that is difficult to find in other places.

The itinerary allows you to visit the best preserved spots of our natural water environment, but also to learn how the people of la Costera have found a thousand ways to make the most of water and transform it into life.
We invite you to walk along this path where you will never cease to feel the murmur of the water or the sound of the drops of water hitting more water or stone. A route through the veins that carried and carry life to the body of la Costera. 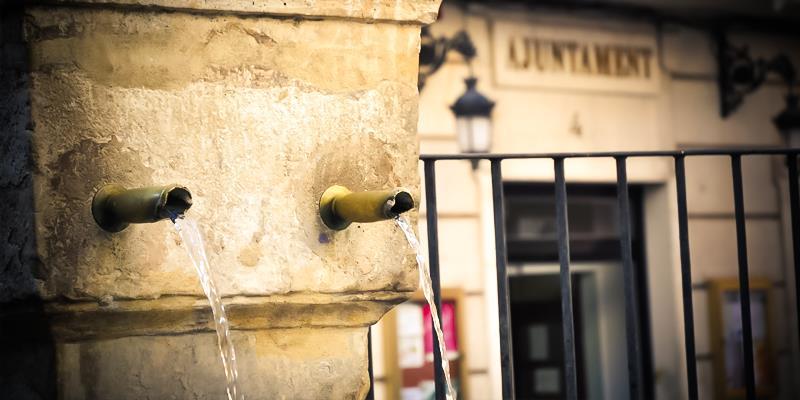 In La Llosa we can find two important witnesses of the public use of water that are still very much alive: la Font de l’Església and la Font del Racó. Historically, the growth of the villages was accompanied by the construction of fountains, which provided service to the inhabitants.
3
LA LLOSA DE RANES 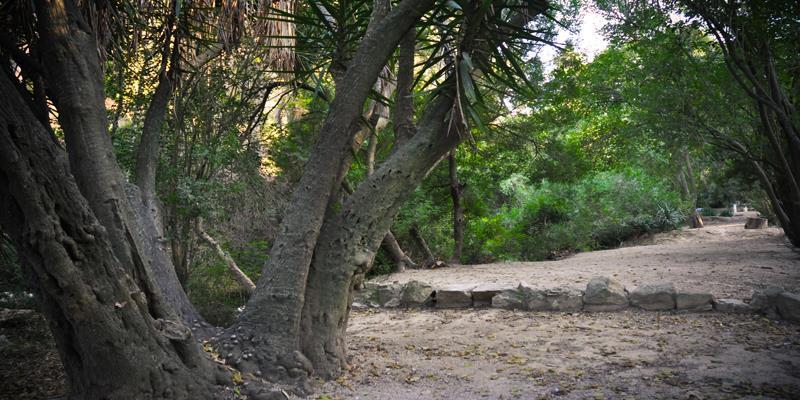 THE SPA AND THE HERMITAGE OF SANTA ANNA

On the outskirts of Llosa de Ranes are the baths or spa of Santa Anna. This spa was built at the end of the 19th century and remained open until the 1970s. It was later restored and is now used as a hostel.
3
LA LLOSA DE RANES 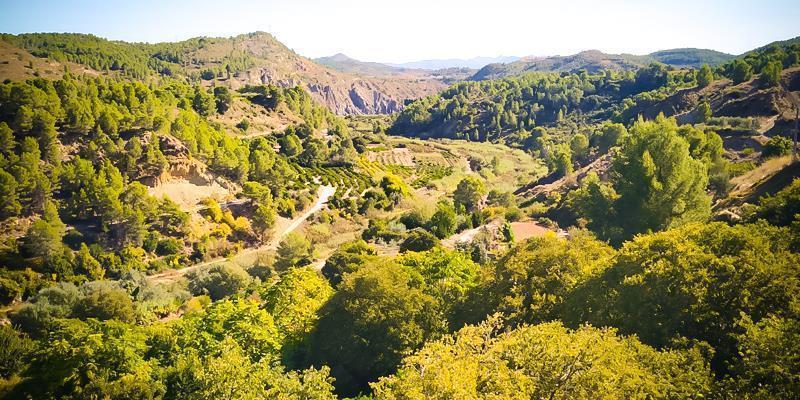 Estubeny preserves some interesting springs in the surrounding area, but it is the Cabrentà spot, very close to the town centre, which is of greatest water interest. La Cabrentà is located in the canyon or strait of the Sellent river, a valley just over a hundred metres wide that the river has created by eroding the original mountains. It can be crossed following a signposted route from the village, from where we can enjoy magnificent views over the valley.
4
ESTUBENY 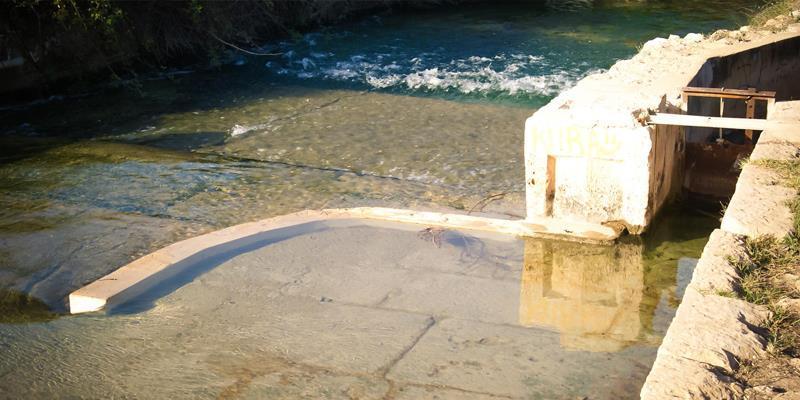 The Costera de Ranes is the historical sub-region made up of the villages on the left bank of the Canyoles river. A stretched strip of villages that includes Torre de Canals, Canals, Aiacor, Torre de los Frailes (or Torre-Cerdà), l'Alcúdia de Crespins, Cerdà, Torrella, Llanera de Ranes, la Llosa de Ranes, Rotglà i Corberà, la Granja de la Costera and Vallés. It covers the land that was irrigated from the irrigation channels reached by the Riu dels Sants (Sants river). Hence the place name Rana (Ranes), which seems to derive from an Arabic word for springs.
5 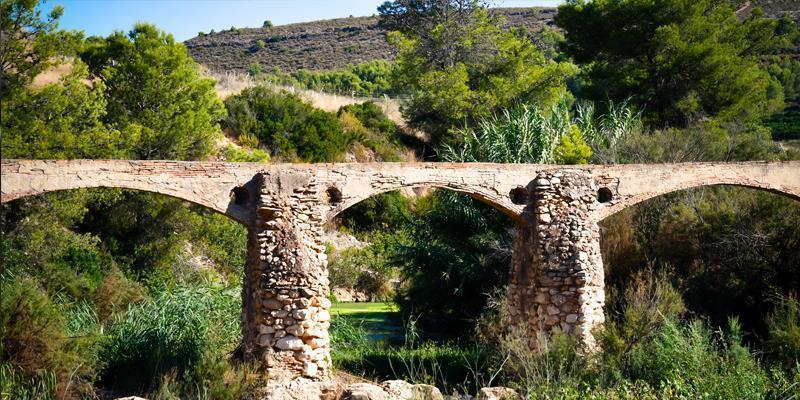 A tributary of the Albaida river, with which it merges its waters very close to Xàtiva. Although it is not very abundant, its course forms a natural environment of high ecological value. In the Barxeta river we can find interesting formations and plant specimens such as bogas, watercress, reeds, willows, black poplars and elms.
This vegetation and its waters are the basic substrate for a fauna that includes autochthonous species such as eels, shiners and “madrilla” (fish), together with other foreign species such as carp. Along with fish and some invertebrates we can find other species such as water rats, genets, badgers, weasels, etc., water snakes and amphibians.
It is also home to numerous species of birds, such as kingfishers, bee-eaters, nightingales and goldfinches. Occasionally, other birds can be found, such as the collverds (Mallard) that move from nearby marshes or make stops on longer journeys.
1
BARXETA 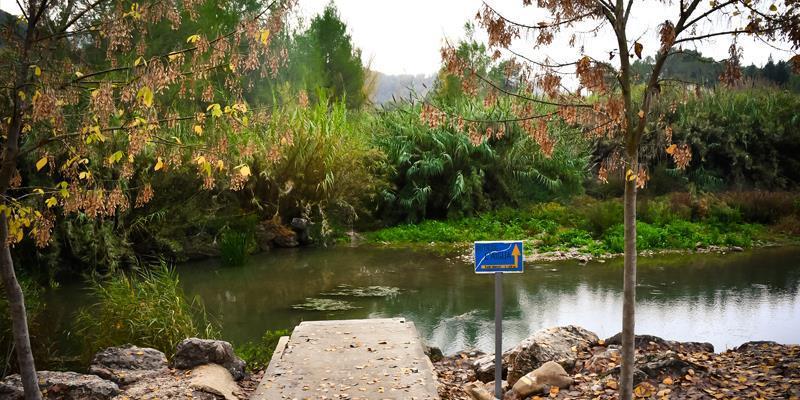 EL GENOVÉS AND ALBOI: FOUNTAINS, WATERWAYS AND RIVERS OF NATURE

At the entrance to El Genovés we see the first landmark on our route, the monumental fountain of Sant Pascual Bailón, built in 1777 in honour of the town's patron saint.
In the surrounding area and following a path in the direction of Xàtiva you will come to the Alboi spot. At this point, close to the hamlet of the same name, we can enjoy the river and the famous arcadetes. The arcadetes de Alboi are Gothic arches (15th-16th century) built on an earlier work (11th century) of the Bellús aqueduct that carries water from the Albaida river to the orchards of Xàtiva, over a distance of more than 7 km.
2
EL GENOVÉS

XÀTIVA THE CITY OF A THOUSAND FOUNTAINS

Historical and millenary, Xàtiva has always been an important city. Since ancient times, the people of Xàtiva have had to think about how to get water to the city's homes. As it was complicated for such a large population to depend exclusively on cisterns and wells, conduits were set up to bring water to the city from the irrigation channels that irrigated Xàtiva's market gardens. Thus, canals such as the Bellús canal, the Ranes irrigation channel or the Aigua Santa canal were used to supply the city.
In the 18th century there were more than nine hundred fountains in the city, divided into three classes: The royal ones (monumental and maintained by the city), the neighbourhood ones (run by the residents of a street or neighbourhood) and the private ones, which sprang up in private homes. For all these reasons, Xàtiva is known as "the city of a thousand fountains".
2
XÀTIVA 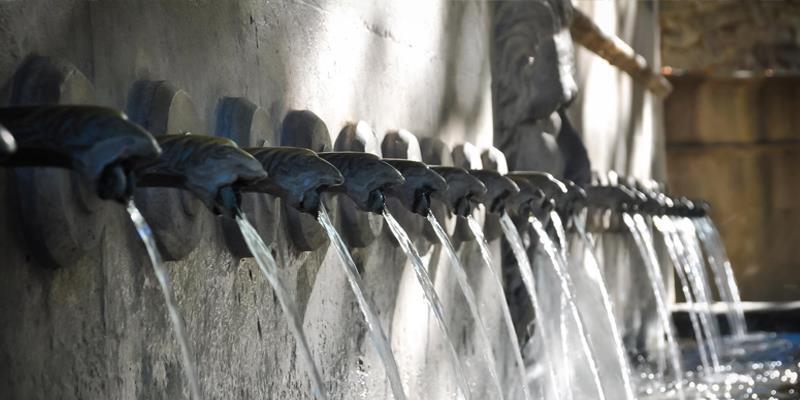 Today, many of these fountains can still be visited and form a rich heritage site that can be found in very few other places. A living and refreshing testimony of how our ancestors took advantage of all their ingenuity to facilitate living conditions and life itself in their city.
In the historic centre of Xàtiva there is a route that allows you to visit some of the most important fountains in the city. A refreshing way of getting to know the streets, the heritage and its evolution throughout history.
2
XÀTIVA 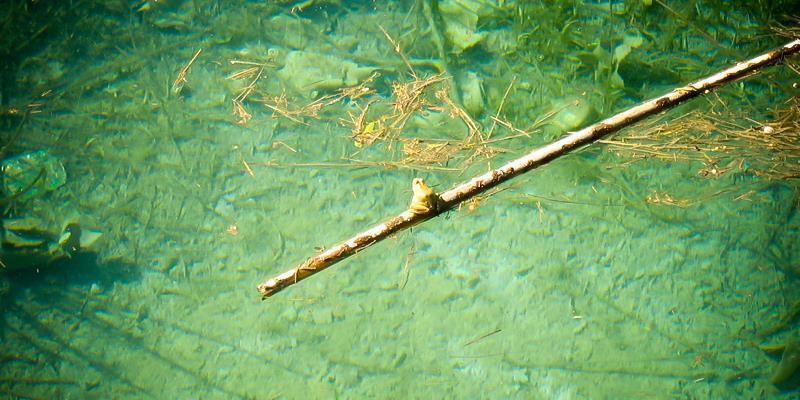 The river springs in the municipal district of l'Alcúdia de Crespins, in the spot known as El Naixement and very close to the Riu Nou bathing area. Unfortunately, the overexploitation of the aquifers by irrigation wells has caused it to run dry for long periods of time, having to make use of a well and motors to carry water at certain times of the year. Downstream from the river there are five dividers from which the irrigation ditches that irrigate the region start.
6
L'ALCÚDIA DE CRESPINS 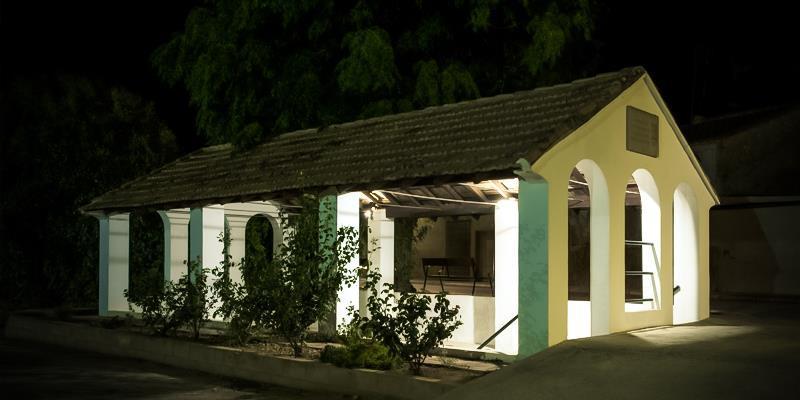 The towns of l'Alcúdia de Crespins and Canals are crossed in their subsoil by this network of irrigation ditches and the adjacent ones that flowed from them. Thus, many houses in the old villages had wells that were directly supplied with water from the irrigation ditches. Many private dwellings adjoining the Sants river or la Sèquia de Ranes (Ranes irrigation canal) ditches opened private washing places.
Other villages on la Costera, such as Cerdà or Torrella, bordered the Ranes irrigation channel, which supplied them with water for irrigation and domestic use.
7
CERDÀ 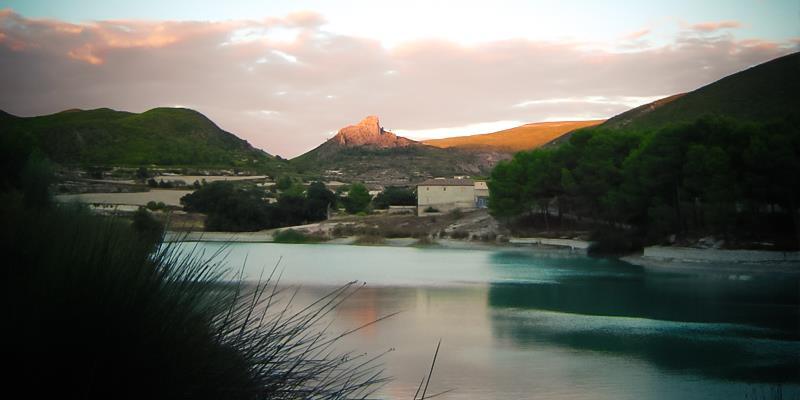 EL BOSQUET, THE FOUNTAIN AND THE LIFE OF WATER

A few kilometres to the south of the town centre of Moixent is the Bosquet area. In the last third of the 18th century, the initiative was taken to build a reservoir in this area to improve local irrigation. The reservoir is located in the centre of an enclosed basin, between the Picaio, Talaia, Corvatelles and Balarma Mountains. It has a capacity of around 160,000 m³, irrigating an area of just over four hectares.
8
MOIXENT 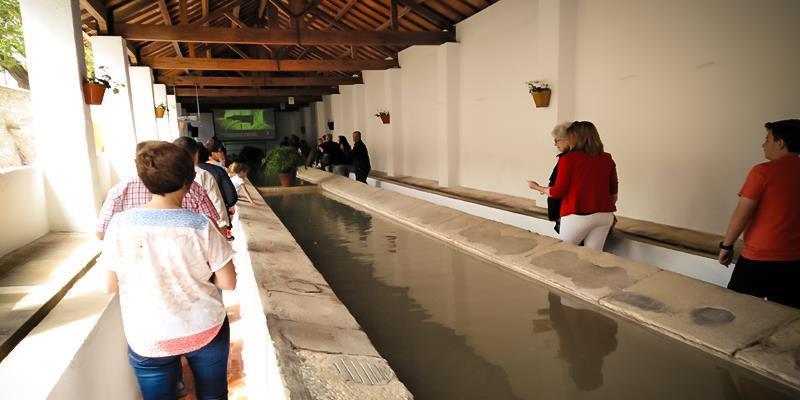 THE MINAT AND THE FONT DE BAIX

La Font de la Figuera also undertook works to irrigate part of its dry land. Even so, La Font de la Figuera was supplied by different methods that showed great ingenuity. There was the Font del Poçanco, which was supplied by the minat de Serramala. A minat is an artificial underground gallery that carries water from the subsoil to where it is needed. In 1776, the Font de Baix and an irrigation pond were built, which was supplied by this surplus water. Very close to the fountain there was a washing place that was supplied with water from the barranc dels Molins (Molins ravine). In 1885, a new washhouse was built on top of the old one to increase the service it provided.
9
LA FONT DE LA FIGUERA
Manage Cookie Consent
We use our own and third-party cookies for strictly functional purposes, allowing navigation on the web, as well as for analytical purposes and to optimize the web. To manage or disable these cookies, click Preferences. Press the Accept All Cookies  button to confirm that you have read and accepted the information presented.
After accepting, we will not show you this message again, except in the event that you delete the cookies from your device.